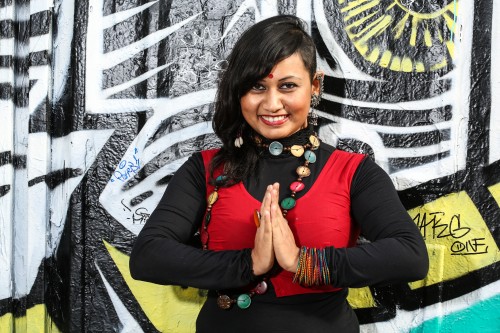 One of India’s most promising musicians and gifted singer, songwriter and composer; Tritha is a rising figure in India and Europe, not only as a performer but also as a strong and modern Indian woman fighting for Women’s freedom and independence.

Tritha was also featured on BBC World, European TV channels ARTE:Tracks and Canal +, where she was termed as a “Music Activist’. Her picture has been traveling all over the world in 2011 and 2012 with exhibition – ‘Women Changing India’, organized by Magnum Photos from Paris & BNP Paribas.
In her younger days, she had won popular TV show Antakshari on Zee Tv, and in the recent past, represented INDIA with her band Tritha Electric at the Asia Music Festival 2013 in Miri, Malaysia, in the Kaloobang Festival at Reunion Islands in 2014 and the prestigious Womex festival in Budapest in 2015.

Her debut album was released on Sony Music in June, 2014, “PAGLI” – a story of the metamorphosis of the Indian woman from traditions to modernity.
A prodigy singer as a child, Tritha traces her roots to Kolkata, training in Indian classical vocal music since she was 5 years old, with several gurus in Agra and Patiala gharanas and Bishnupur Gharana since 10 years under the focussed guidance of Pandit Santanu Bandhyopadyay and now under the Padmashri Gundecha Brothers learnign the rich ancient and meditative vocal style of Dhrupad singing. She has been invited for special performances, with world famous percussionist Sivamani, designer Urvashi Kaur for live performance on the ramp of India Fashion Week, Mallika Sarabhai for a dance production about Sufi saint Lal Ded from the 14th century and the American writer/activist Eve Ensler, famed for the book Vagina Monologues and for the One Billion rising movement with her Indian women collective SPACE, aimed towards social consciousness.

Tritha had also been a speaker at the TEDx Delhi, where she got a standing ovation for her speech and songs about the New Indian Woman’s Voice and relevance on the global front today and has an artists collective SPACE in New Delhi directed towards women empowerment in India. In June 2012, she was featured on a full page in Marie Claire India as one among the ten most interesting young Indian women and also that same month, in Tehelka magazine.

Back from America end 2016, representing India at the one-month Onebeat program where she toured with 25 international socially engaged music artists in October.

The summer of 2017, she will be on an Europe tour with her band, Tritha Electric for the launch of their next album in France, Italy, Germany, and Copenhagen.

Tritha has a sound healing project close to her heart called TRITHA & MARTIN based out of Savoie and Tours in France and have launched their album, a musical medicine for listeners, Elements d’existence in March 2017 at the 1st Sound Healing Festival in Geneva.

She also teaches Indian classical music in Europe and India combining it with Music Healing, Activism and Music Meditation workshops.